Winnipeg’s food scene is never dull. Insiders keep the city’s food lovers satisfied with new foods and new food experiences. Winnipeg’s culture of cuisine continued to evolve in 2013, most notably with the addition of RAW:almond, the pop-up on ice, and the opening of Prairie 360˚, the city’s revolving restaurant and boutique coffee houses like Thom Bargen and Little Sister Coffee Maker. New additions, like The Grove’s Osborne Village location, are on the horizon. The coming year holds much promise too from local food purveyors, restaurateurs and chefs. Here are a few trends we’d like to see evolve in 2014 in Winnipeg.

Party Planners
Several years ago Bistro 7¼ launched School Nights, a weekly Sunday night get together at the South Osborne bistro. The party was free, everyone was invited and themes were reflected in food, drink and entertainment. The lively nights, which are still hosted each week, brought out diners of all stripes. It was (and still is) a fantastic way to spend a Sunday night meeting new people. More and more restaurateurs, chefs and foodies are introducing their own cuisine-themed parties hosted in-house or at secret locations. The professionals will look for creative ways to get bums in seats, especially on off-peak days and hours. We foodies want restaurant-hosted book clubs, themed tasting menus, food-fetes, tea parties and beer pairing dinners. If you build it, we will come.

Grow your own
Chaise Café and Lounge owner Shea Ritchie is one of several Winnipeg restaurateurs and chefs growing their own ingredients in the summer and winter. Ritchie’s Provencher Avenue eatery has a garden and container gardens in the summer and a hydroponic garden in the basement year round. (Robin Summerfield)

University of Winnipeg’s Diversity Foods, with chef Ben Kramer at the helm, is in the midst of starting his own indoor garden on campus inside a largely abandoned greenhouse. He is one of several local chefs growing (or trying to grow) his own greens and herbs. Johnny Kien at Saigon Jon’s and Shea Ritchie at Chaise Café and Lounge have also acquired green thumbs. Sure, Manitoba has a short growing season that severally limits using local produce but we’d still like to see more kitchens putting that ‘eat local’ mantra to the test.

Canning and Preserving
Peasant Cookery, a restaurant in Winnipeg’s Exchange District, started the in-house preserving and pickling trend. Or, in the least, they were the first business locals noticed embracing this trend. In either case, more local food emporiums are pickling, preserving and making jams to serve in-house. This annual Fall tradition preserves locally grown ingredients for service during the winter months and into spring. The jarred delicacies (pickles, asparagus, carrots and beets, berry jams et al) add new dimension to plates on cold winter days.

More pop-ups popping up
Secret dinners, backdoor bistros, alley burgers and supper clubs will continue to spike in 2014 as more professional foodies and food lovers get together on the side. Some pop-ups will be advertised on Facebook and Twitter and open to all. Others will remain on the down-low, skirting liquor laws and keeping those-in-the-know to a limited number. Whatever their form, pop-ups add life to a city’s food scene. The more the merrier.

Big thinkers
In 2013, Chef Mandel Hitzer and architect Joe Kalturnyk launched RAW: almond, Winnipeg’s pop-up restaurant on ice at The Forks. It was and is a resounding success. Diners came out in droves, bundled up in their finest cold-weather gear to experience some magic inside the big white tent. Winnipeg’s roster of chefs isn’t short on big thinkers with great ideas. The ongoing success of RAW: almond has opened the door for other big ideas. There have been rumblings about a winter food festival to celebrate the uncelebrated season. It’s time. Winnipeg can be a renowned food city. It’s on the cusp and the city’s talented crew of food makers and lovers will make it so.

My story first appeared on cbc.ca/manitoba/scene, an arts and culture website for Winnipeg and Manitoba.

But it’s no ordinary pizza party. The women seated at the linen-draped picnic-table are about to tuck into pies loaded with vegetables they just picked at a vegetable farm down the road.

The late-afternoon outdoor garden party is the well-earned reward for work in the field and kitchen.

This is Friends and Lovers, a new two-day retreat at Calder House Bed and Breakfast, located just east of Steinbach in southeastern Manitoba.

The adventure taps into a growing trend—cuisine-focused travelling that connect people with local foods from the dirt up.

Calder House B & B owners Carole Tetreault and Grant Milliner partnered with nearby farmers Kim Shukla and her husband Richard Whitehead of Stonelane Orchard to create a hands-on, yet relaxing retreat for travellers.

Armed with a ‘shopping list,’ guests grab baskets and pick ingredients at Stonelane Orchard. Shukla leads her charges through the fields, greenhouse and orchard, teaching the ins and outs of Manitoba agriculture along the way.

“It sounds funny but we really like to talk about vegetables because it really broadens people’s horizons,” says Shukla. “It’s really about getting back to the land and knowing where your food comes from.”

That food includes a plethora of vegetables including peas and peppers, beans basil and leafy greens, among many other garden-fresh eats.

“People really want to connect with their food,” says Shukla. “And if they can pick their own lettuce and eat it that night they get really excited.”

That’s where husband-and-wife team Tetreault and Milliner come in. Back at Calder House, a circa 1922 farm-house, the duo enlists their vegetable-laden guests to help make dinner using the produce and herbs harvested from Stoneland Orchard. Tetreault leads the kitchen party, teaching any neophytes how to cook and overseeing the action.

Dinner is served on the garden patio (or inside the large dining room if the weather doesn’t cooperate). After reaping the delicious rewards of their garden-fresh feast, Tetreault, a massage therapist and reiki practitioner, can work out the kinks in the upstairs treatment room.

The two-day package is a true food-lovers escape with the added bonus of a peaceful retreat from the buzz of modern life,, says Tetreault.

“I hope (guests) find some peace, reconnect with themselves and just be, be present.”

Friends and Lovers runs mid-July through September. Get dirt under your fingers and eat what you reap. For information visit Calder House B & B’s website. 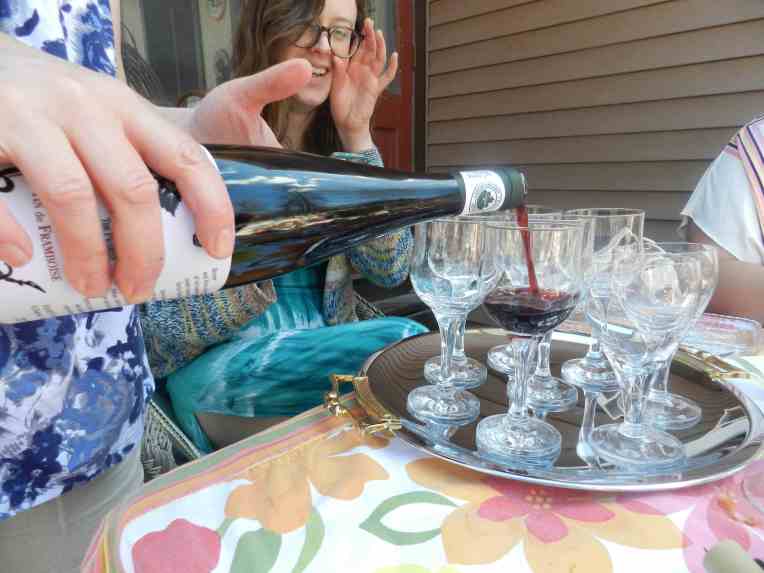 The 42-year-old restaurateur and his wife Danielle, also 42, are set to launch in-house cooking classes at their South Osborne eatery.

The classes have been in the works for months but the idea came together in mid-August, after the always busy couple got through July and their annual commitment to feed the performers at the Winnipeg Folk Festival.

As a side note: Alex and I go way back. I first met him when we both worked at Chi Chi’s near the now-demolished Winnipeg Arena and Stadium. I was a server (a very bad one with zero short-term memory skills) and he was a pony-tailed dishwasher. He worked his way up in the restaurant business, started a catering business with his then, long-term girlfriend Danielle, and then opened Bistro 7 1/4 a few years ago. The restaurant has been a favourite among critics and diners.

And now we can all learn how to cook like Alex.

Here are all the cooking class details, pinched from Bistro’s Facebook page:

Get into Chef Alex’s kitchen! Come learn to cook some fun dishes, hands on in the Bistro 7 1/4 prep kitchen. Choose one or all 6 classes. Chef Alex will work with you to make great food that you will all enjoy eating as you go. Learn how to make chicken galantine, sear a perfect duck breast, and whip up a souffle! Cook kale 4 different ways! Learn cooking tips and Chef’s secrets.